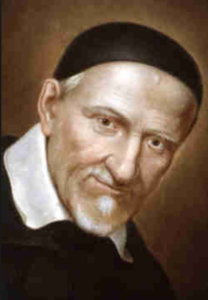 St. Vincent was born in 1581 in Pouy, in the Province of Guyenne and Gascony, the Kingdom of France, to a family of peasant farmers. He had four brothers and two sisters.At an early age, he showed a talent for reading and writing. At 15, his father sent him to school, managing to pay for it by selling the family’s oxen. A good ecclesiastical career, his father believed, would enable De Paul to be financially independent and to help support his family.

He studied humanities in Dax, France, with the Cordeliers and he graduated in theology at Toulouse. He was ordained in 1600 at the age of nineteen, remaining in Toulouse until he went to Marseille for an inheritance. In 1605, on his way back from Marseille, he was taken captive by Barbary pirates, who brought him to Tunis.[4] De Paul was auctioned off as a slave to the highest bidder, and spent two years in bondage. Ultimately, the story goes, he became the property of an apostate Christian, whose wife aided in the escape of all his slaves.

Vincent de Paul escaped in 1607. After returning to France, de Paul went to Rome. There he continued his studies until 1609, when he was sent back to France on a mission to Henry IV of France; he served as chaplain to Marguerite de Valois. For a while he was parish priest at Clichy, but from 1612 he began to serve the Gondi, an illustrious family. He was confessor and spiritual director to Madame de Gondi.[4] It was the Countess de Gondi who persuaded her husband to endow and support a group of able and zealous missionaries who would work among poor tenant farmers and country people in general.